Please ensure Javascript is enabled for purposes of website accessibility

Looking to add a moisture meter to your tool bag? Here's what you need to know to find the right tool for you.

Moisture meters come in two varieties: pin and pinless. A pin moisture meter can provide quantifiable results but needs to pierce the surface to take measurements; a pinless moisture meter is faster and non-destructive but only provides a relative reading.

Pin moisture measurement requires the physical insertion of the two pin probes into the wall (or material in question). Then an electrical current is run between the two probes, and the material's moisture content is determined by measuring the resistance the current encounters. The wetter the material, the more conductive it is. Water, with its dissolved salts and impurities, conducts electricity, while building materials such as wood do not, meaning dry walls and floors offer more resistance.

Because pin meters are sensitive to temperature and the type of material being measured, a good meter should come with options to compensate for the temperature and material encountered. The FLIR MR55, for instance, comes with a built-in library of 11 different material groups and automatically compensates for ambient temperature. Pin moisture meters provide a quantifiable measurement of the moisture percentage in the material but require some damage to the material being measured.

The advantage of pinless moisture meters is they won't damage your walls—but there's a catch. A pinless meter is a "relative" or unitless measurement device. Unlike a pin moisture meter that measures resistance, the pinless meter measures an electrical property of the material called relative permittivity.

Any rise in a reading indicates moisture or the presence of some other conductor or high permittivity material (a metal stud behind the wall, for instance, would produce high readings). Because of this, taking multiple measurements over the suspected area is highly recommended.

Pinless moisture meters may have a flat sensor that needs to be placed flush against the material's surface, a ball probe that allows you to easily measure into corners and around baseboards, or integrated as a pin and pinless meter.

Another feature you may want to consider on a moisture meter is thermal imaging. FLIR meters equipped with Infrared Guided Measurement (IGM) use thermal imaging to help quickly locate potential moisture issues. Instead of hunting around for hidden leaks or signs of moisture, you can scan large areas to visually target the problem and verify it using the built-in pinless meter or an accessory pin probe.

How To Detect a Water Leak with Thermal Imaging

Water leaks and moisture infiltration can cause serious damage to a house or building and can be difficult to detect until it's already too late. Using a thermal imaging camera and under the right circumstances, it's possible to find hidden water and moisture issues without resorting to destructive testing.

There are many sources of building moisture, including humidity (during any season), condensation, pipe leaks, rain and snow, and even people and animals breathing. Usually, a low level of moisture is fine, but leaks or heavy condensation can cause serious problems. A thermal imaging camera cannot "see" moisture in walls, but it can detect subtle temperature differences and patterns that reveal the existence of water.

Moisture in buildings usually spreads in a recognizable pattern depending on where the water is. For example: 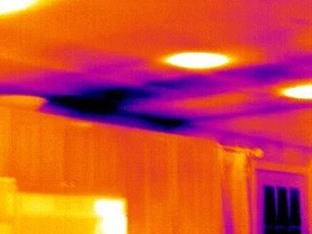 Flooding - Water wicks up a wall into the insulation and up wall studs. 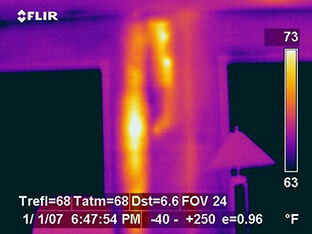 In addition, it's best to use a camera that allows you to manually adjust the level and span of the thermal image. Moisture problems appear best when the image is adjusted for about a 10°C or 20°C span, which helps even minute temperature differences stand out.

ABATIX offers a wide selection of FLIR and Extech moisture meters. You can always rely on our team of knowledgeable reps to help you make the most informed decisions. Contact your local ABATIX rep today.

The ABATIX website uses cookies to personalize your experience on our site, analyze how our site is used and serve targeted ads and offers in order to provide you with a better experience.  For more information on what data is contained in the cookies, please see our Privacy Policy.  To accept cookies from this site, please select the ‘Accept’ button.